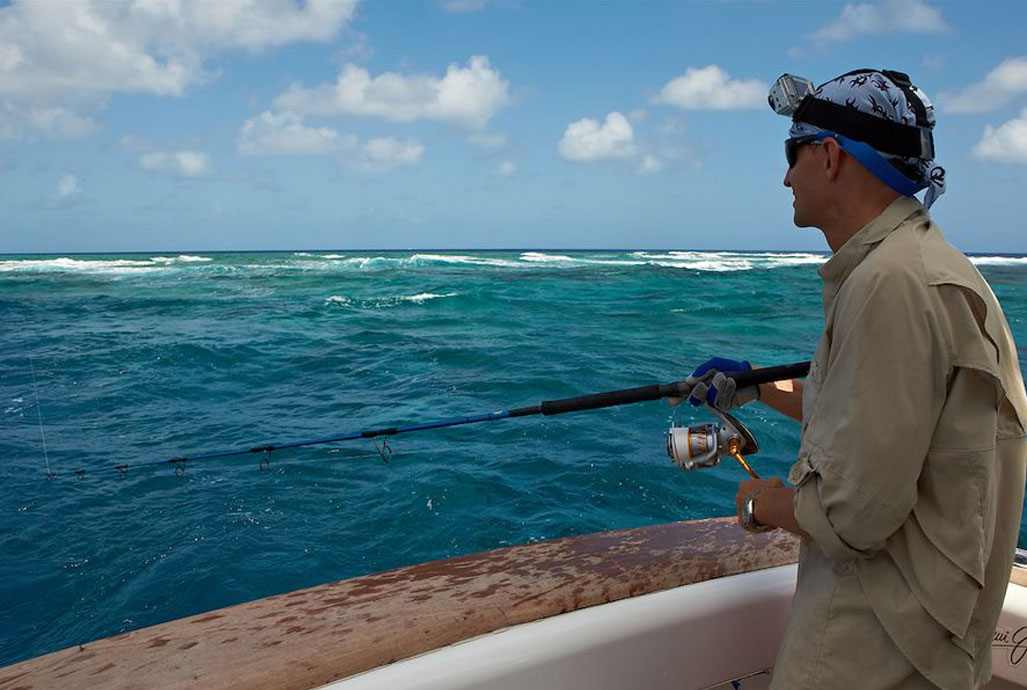 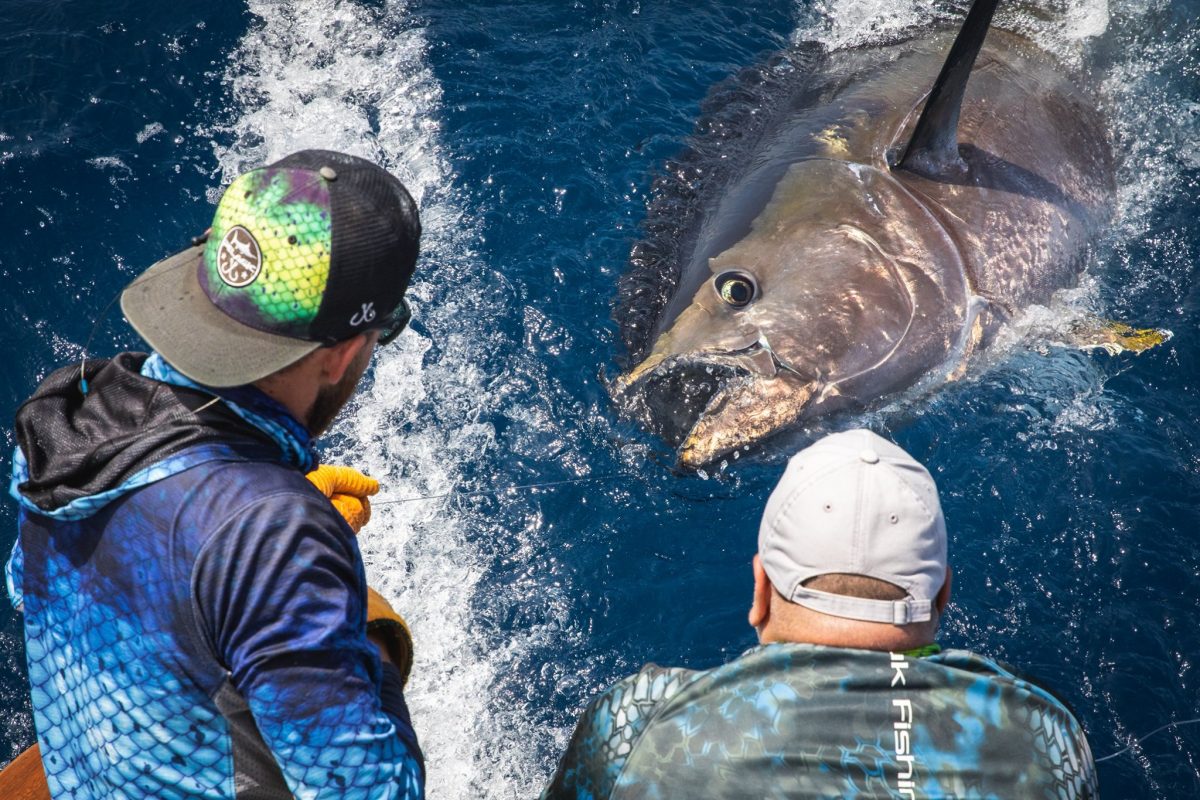 In September 2000, the first Irish rod caught Atlantic Bluefin Tuna (ABFT), was taken out of Killybegs, in the Donegal Bay. Three fish were taken that season, including a new Irish record of 529lbs. This hugely significant event was the start of an amazing story, but the best was yet to come, by far….

What happened the following year set angling circles worldwide alight. Adrian Molloy, whose name would soon become synonymous with some of the best Atlantic Bluefin fishing in the world, achieved an incredible feat. From a small fishing boat out in the Donegal bay, he hooked, played and landed an incredible 968lb ABFT, below, setting a new European and Irish record that still stands in 2019.

Decline and fall, and rise…..
A number of fish were taken over the following 3 years but perhaps consistent with the huge decline occurring at that time in Bluefin numbers, after 2005 they pretty much disappeared from those Irish waters.

ICCAT, the species’ Global Management body, finally responded to this crisis and in 2007 enacted a 15 year recovery plan. From around 2010, the Stock Spawning Biomass troughed and began to recover, evidenced by multiple, wide ranging stock assessments since. Bluefin began to return to Irish waters from around 2012, aided perhaps by the then fledgling recovery in stocks, but also it seems by a major shift in a long term (typically 25-40 years) North Atlantic climatic cycle, the AMO, that entered a new phase early this century.

Whatever the reason, from 2013 on, ABFT have been regularly sighted and caught off of Donegal and indeed other parts of the Irish coast. Adrian Molloy was at the centre of efforts to persuade the Irish Government to lobby the EU to allow Ireland to set up a recreational catch and release fishery. ICCAT and EU rules deemed such a fishery illegal at that time for any country such as Ireland that did NOT hold a part of the EU’s huge share of the Global quota for Atlantic Bluefin. Adrian initiated and took part in a number of authorised research programs from 2016 involving the capture of ABFT and the application of high tech Satellite Tags that pop off after 9-12 months revealing great detail of the behaviour of that fish over the previous months.

Despite the Irish Government’s lack of willingness or success in establishing a recreational fishery, multiple Irish skippers continued to operate charters to catch and release ABFT. In 2018, Adrian caught, tagged and released 228 Bluefin, including many under formal Research programs. With fish typically ranging from 250-500lbs, this feat is UNRIVALLED BY ANY CHARTER VESSEL OPERATOR IN THE WORLD.

EU threats, a silver lining.
In August 2018, the EU audit office issued a formal warning to Dublin that Ireland was ‘operating an illegal recreational Bluefin Tuna fishery’, and that if it was not stopped, Dublin could face huge fines….

Faced with a PR disaster, with Brussels penalising Ireland for activities France, Spain and Italy amongst other carry out perfectly legally, in the midst of sensitive Brexit negotations with huge implications for Ireland, the EU found a temporary solution.

ICCAT rule changes in 2017 made it easier to establish authorised catch, tag and release programs in ‘non quota holding countries’. In early 2019 such a program was announced for Ireland, From mid August 2019 for 2 months, 15 charter vessels would be licensed to take paying recreational anglers to participate in a widespread EU/ICCAT authorised floy tagging program in Irish waters. At last, an opportunity existed for large numbers of anglers to experience this amazing angling opportunity free of concerns regarding the legality of those trips.

A fellow SCBI – Sportfishing Club of the British Isles – Club Member and I decided we wanted to get a piece of this action. The opportunity to fish with the ‘godfather’ of not just Irish but at the very least European Recreational ABFT fishing, Adrian Molloy, was just too good to ignore.

A trip to Donegal, this world renowned fishery, in the company of Adrian was no less than a pilgrimage for us, underpinned by the knowledge we might gain from our time with him.

The Pilgrimage.
In early October, Barry and I, along with renowned UK Charter skipper Jerry Rogers, touched down in Ireland at Knock airport, appropriately the centre for another pilgrimage, to the Sanctuary of our Lady of Knock.

Knock lies a good 100 miles South of Kilcar, our base on the North side of Donegal bay for the coming three days. A hire car was secured and a journey through some incredible scenery began. As you head North through Sligo, and hit the coast road, Donegal bay begins to appear on your left. The scale of it is breathtaking, At its widest point between, Malin Head and Ballyconnel, it is over twenty miles across, surround by imposing granite mountains that crash down to the sea, and many small inlets offering sheltered waters.

The North side of the Bay is dominated by Killybegs, a largish fishing port home to dozens of huge pelagic offshore trawlers.

Kilcar is a small village containing everything a Bluefin fisherman could want. A great Bed and Breakfast, run by Adrian’s sister-in-law, two supermarkets, and three pubs….

Adrian runs an 11m BW Seacat Catamaran, a large, spacious boat with  great stability that we were to be grateful for in coming days.

Trying to subdue our ‘Molloy superfan’ urges, the three of us met Adrian aboard ‘Deep Blue’ the next morning and kicked off the adventure.

We knew conditions were tough before flying in and unusually for October the fish had thinned out recently, perhaps in response to multiple unpleasant weather fronts (which had curtailed fishing in the weeks before our arrival). Trolling without strikes is amongst the least exciting form of fishing in my view, but the chance to speak to Adrian at length was invaluable. Softly spoken, his knowledge of Bluefin biology, behaviour, fishing techniques, gear and regulations is incredible, and his willingness to share that was humbling.

We had been joined by an observer from Inland Fisheries Ireland who are overseeing the Tuna CHART (CatcH And Release Tagging) program in collaboration with other agencies. Far from being any hindrance on the first two days, it was really useful to talk with them at length about the background, objectives and operational framework for the program. We also completed a angler survey being carried out under CHART by Inland Fisheries Ireland to assess the socio-economic benefits of the program to the regions carrying it out.

Whilst at sea we were ‘intercepted’ by a couple of IFI Ribs. 15 Vessels are authorised in the program. IFI are tasked with inspecting authorised vessels and other vessels outside the program who they suspect of targeting Bluefin. The process may involve a caution, followed by confiscation of tackle for repeat offences, and ultimately prosecution.

Whilst we were there, the two month program that should have ended 15th October was actually extended for another month given the poor weather that had curtailed fishing the previous month.

The Fishing.
Day one was grey, and wet, and cold, and a bit rough… We saw few signs of Bluefin on the sounder, little bird action and occasional Dolphin activity. Our expectations on day one were low, and we raised no fish, but as we moved further from the full moon and the forecast improved we were hopeful for day 2.

The killer technique for Donegal Bluefin is Trolling spreader bars. The bay itself is pretty featureless and unlike the SW UK waters does not appear to have many obvious areas where ABFT may aggregate. Covering ground, tapping into intel, and spotting birds and slicks is the key it seems to tracking down the quarry.

Day two saw the rain clear and sunnier skies. Large numbers of dolphin, several Minke whales and more bird action on baitfish fired up our hopes, and despite marking ABFT under working birds they declined throughout the day to play ball. Adrian worked ceaselessly scanning the skies, working numerous promising areas but it appeared Day 2 would end fishless. Two such days back to back is extremely unusual in this hugely productive fishery. Even given Adrian’s calm, measured composure, it was apparent he was very determined to not give up easily.

By 4pm we were thinking of the Guinness when over Barry’s shoulder I saw a huge eruption on the back of the short bar. The 80W equivalent reel screamed as the fish tore off with the stinger. The response to a strike needs to be very measured. Jerry and I had discussed with Adrian our roles, and the team swiftly cleared lines, monitored and managed the hooked up rod/reel, whilst getting Barry harnessed and set up in the chair. CHART mandates that anglers must fight fish from a chair or a gunwhale rodholder. It is designed with non anglers in mind, or those of minimal experience, who want to access this fishing opportunity. ‘Deep Blue’ is well equipped with an adjustable fighting chair, and top quality Duel reels coupled with custom heavy trolling rods.

With over 250 yards of line out, Barry knuckled down to bring his first Bluefin to heel. It is an emotional and stressfull process, as Barry pointed out he was under the gaze of the Bluefin ‘godfather’ Adrian, an Irish Fisheries Board official, top UK skipper Jerry and me, who would rip him to pieces if he screwed it up……

The fish came up quickly and easily, too easily. Adrian refused an opportunity for a quick leadering and it was the right call. the fish was very green still and tore of nearly 100 yards on its next run from the boat. Lots of short, painful pumps and it was back alongside. 30 minutes from hookup to boatside. Expertly leadered by Adrian, the fish was floy tagged, had a fin clip taken by the IF official, was measured, revived and released within ten minutes, to kick away strongly. Barry’s first Bluefin, high fives all round, and much Guiness consumed that evening.

Day three saw just Barry and I out with Adrian. The swell was I’m sure the biggest I’ve ever been out fishing in, but ‘Deep Blue’ rode it amazingly well. Once again a frustrating day marking a few fish, working huge pods of feeding Dolphin and diving birds, more Minke whales but no strikes. At almost the same time as the previous day, 4.15, the long port rigger bar was hit twice by a large Bluefin before connecting with the stinger on the third attempt. An action replay of day 2 had me in the chair quickly, and this fish I had boat-side in around 20 minutes. Interestingly, this Bluefin measured out at 82″, exactly the same as Barry’s fish….

I cannot express how special it was to get Barry’s first Bluefin, and my first Irish Bluefin under Adrian’s tutelage. It was an absolute delight to spend time with an exemplary fisherman and gentleman. His knowledge of and respect for his quarry is immense and his commitment to establish a legal recreational Live Release Bluefin fishery is an inspiration as we attempt the same here in UK waters.

If you’ve stuck with me this long, many thanks for taking the time. The Irish program now runs until 15/11/2019. Get out with Adrian if you can.